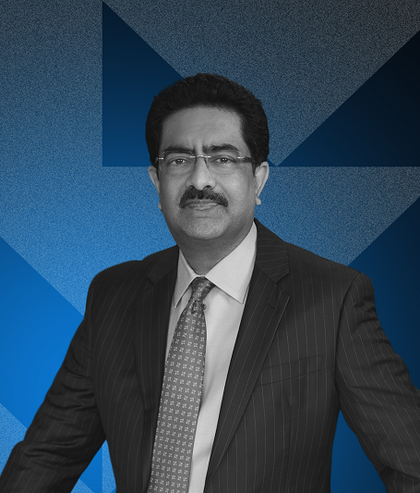 Mr. Kumar Mangalam Birla, is the Chairman of the venerable Indian multinational Aditya Birla Group. The Group’s legacy dates back to over a century and it was the first Indian business group to venture abroad. Today, the group is present in 36 countries across six continents with over 50% of its revenues coming from overseas operations.

In the 24 years that he has been at the helm of the Group, he has accelerated growth, built meritocracy and enhanced stakeholder value. In the process he has raised the Group’s turnover by almost 25 times.

He has been the architect of over 40 acquisitions in India and globally, the highest by an Indian multinational. Under his stewardship, the Aditya Birla Group enjoys a position of leadership in all the major sectors in which it operates, from cement to chemicals, metals to textiles and retail to financial services. Over the years, Mr. Birla has built a highly successful meritocratic organisation, anchored by an extraordinary force of 120,000 employees belonging to 42 different nationalities.

Outside the Group, Mr. Birla has held several key positions on various regulatory and professional Boards. He was a Director on the Central Board of Directors of the Reserve Bank of India. He was Chairman of the Advisory Committee constituted by the Ministry of Company Affairs and also served on The Prime Minister of India’s Advisory Council on Trade and Industry. As the Chairman of Securities and Exchange Board of India (SEBI) Committee on Corporate Governance, he authored the First Report on Corporate Governance titled ‘‘Report of the Kumar Mangalam Birla Committee on Corporate Governance’’. Mr. Birla also served as Chairman of SEBI’s committee on Insider Trading, which formulated Corporate Governance principles for Indian corporates.
Mr. Birla is deeply engaged with Educational Institutions. He is the Chancellor of the Birla Institute of Technology & Science (BITS) with campuses in Pilani, Goa, Hyderabad and Dubai. He is also the Chairman of India’s premier management institute — Indian Institute of Management, Ahmedabad.

A firm practitioner of the trusteeship concept, Mr. Birla has institutionalised the concept of caring and giving at the Aditya Birla Group. With his mandate, the Group is involved in meaningful welfare driven activities that distinctively impact the quality of life of weaker sections of society.